The Death of the Flea Circus Director 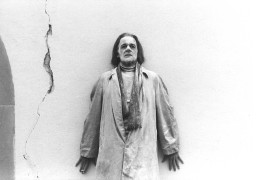 With the help of his assistant Anja, Ottocaro Weiss intends to put the plague on stage: circumstances beyond his control and a «lack of fresh talent» have forced him to close down his flea circus. For Weiss, the plague means the «extinction of everything that makes life miserable and low», and freedom along with it. Unbeknownst to him, he has won the support of a patron who is of the exact opposite opinion: for Johannes Wagner, the plague is an «organising principle», and, aided by his agent Moosbrugger, he is able to smuggle a new number onto the programme. Whereas Ottocaro Weiss means to represent the plague theatrically, what appears on stage is the scientific reality of the rat-borne infestation.

Wagner believes that he is doing a service to a super-civilised humankind by unleashing the epidemic, but he is foiled by Weiss, whose need to salvage his own personal credibility and regain the political dimension he had lost leads him to exchange the theatre's world of appearances for reality. In the end, the freedom afforded by the stage is merely an illusion, and is not enough.

This is the most perfectly Brechtian film to come along in some time. This qualification, unfortunately too often used up, is here in evidence in the treatment of the image and the sound (use of intertitles and of off- screen voice) as well as in the conception of the entire work. The Death of the Flea Circus Director is a kind of political fable.

Flea circus director Ottocaro Weiss, delightfully interpreted by François Simon, must find something else to do after the death of his crafty insects. During a village wake he discovers that the memory of the plague can shake people out of their consumer- sleep. At the same time, a mysterious capitalist decides that the terror springing from an eventual plague epidemic could be an agent for the revival of faith, and a good occasion for him to gain control of an increasingly subversive society. Ottocaro, without knowing it, becomes the tool of the diabolical capitalist.

«Ideas have as much contaminating power as diseases» states one subtitle. But, while the director is a true revolutionary, the capitalist is obviously trying to propagate reactionary ideas against the red plague («A red spectre haunts Europe», wrote Karl Marx, «the one of communism»), and he wants to rouse a black plague (fascism) which would throw the terrorised and lost population towards «law and order». When he is caught, he regrets that he has not paid attention to the fact that Weiss is a Jew, and was therefore «a natural fomentor of revolution».

Thomas Koerfer's ending, in which one can easily recognise the influence of the German school, in particular Alexander Kluge, is a brilliant example of the blossoming of Switzerland's cinema. The film is a difficult and dense piece of work that requires constant attention. If it's very serious moral leads to reflection, the humour that nourishes it and the pleasure it gives us are worthy of Master Brecht.

A German-Swiss film in the Critics' Week, Thomas Koerfer's The Death of the Director of the Flea Circus, is overtly a parable: consciously Brechtian, carefully distanced, worked out with great gravity, but in it's first hour drily and delightfully comic. Ottocaro Weiss loses his performing fleas in a crop- spraying operation, seeks compensation from the sort of government agencies where fleas would never be found, and after a chance encounter with a macabre village pageant transforms his enterprise into a theatre of the plague. The meaning of this symbol, and it's relation to anarchy or fascism, becomes the film's concern; and Weiss worries at it with the intellectual resolution of a Teutonic terrier, barking up every theoretical tree that the subject might suggest. Wit and concentration see him through; and in François Simon he has a marvellous actor, sharp, mournfully intelligent, as fragile and stalwart as one of his own fleas, winning a total sympathy he never demands. Kluge would seem to be the main influence on the film; and an influence most positively assimilated. 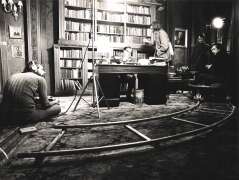