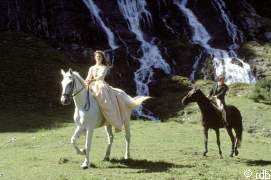 It's carnival in Munich, and Green Henry, a young Swiss art student, is observing the goings-on with a mixture of revulsion and fascination. In the midst of the chaos and noise he encounters his best friend, the sensualist Dutch artist Lys, who is taking advantage of the masked parade to deceive his fiancée Agnes with Rosalie, herself bent on enjoying her own carnival experience. Henry takes Agnes under his wing when she is forced to watch aghast as Lys recklessly betrays her, and, overcome by an agitation he cannot at first understand, Green Henry challenges his friend Lys to a duel...

The duel is to take place at dawn.

As the appointed hour approaches, Green Henry recalls his youth in Zurich: He reviews the untimely death of his father while out hunting, a death which constitued an escape from Henry's mother's oppressive melancholy.

He remembers his cousin Anna, the love of his innocent youth, from whom he received his first kiss while at school but who was forced for reasons of health to retire with Henry's uncle's family to their country residence.

One fine day, a travelling theatre troupe comes to the environs of Zurich to stage a production of Faust. Green Henry, drawn by his curiosity, is summarily pressed into service in the magician scene, for which he must wear a monkey costume. From his hiding place in the wings, he observes Judith, the young actress playing the role of Gretchen, as she is forced to submit to the will of her husband offstage. Once the show is over, too, Henry must remain despondently in position, for his clothes have been stolen.

Upon arising the next day, Green Henry flees, naked, into the arms of his mother...

During his youth, Green Henry apprentices as a painter with the eccentric Römer, who cannot forgive Henry when he breaks off his study for reasons having to do with his passion for Anna. Green Henry leaves Zurich and moves in with his uncle in the country. Meanwhile Anna has become a spectacularly beautiful young woman: At a series of occasions at which they are both present, their love is rekindled as if they had never been separated. Green Henry, however, is drawn equally to Judith, whom he has also coincidentally re-encountered. She lives nearby alone, utterly cut off from the hubbub of society, and Green Henry cannot resist the allure and compassion of his mistress in affairs of the heart.

From this moment on he is tortured by his conscience, quite torn between the two women as he is. And his inner conflict is only intensified when Anna falls seriously ill.

He watches in disgust as the funeral dinner quickly becomes an uncontrolled revelry including both family members and villagers, and grief and pain cede to drunkenness and gluttony, to be totally neglected as the party begins to sing and dance.

Green Henry flees to Judith's side, at once amorous and despairing, and the couple enjoy another night of love.

In the morning he leaves her, as she fulfills a long-held wish and emigrates to America. Green Henry, for his part, travels to Munich, where he is finally able to return to his studies and his quest for freedom.

As he recalls his youth, Green Henry realises why he has so precipitously challenged his friend Lys to a duel: His friend's betrayal of his fiancée, enacted before his eyes, has reminded him of his own betrayal of Anna.

The duel takes place at dawn.

Once the two have crossed swords for the first time, the matter seems to take a turn for the better, as Lys appears to have simply been making another of his tasteless jokes. With grim resolve, however, Green Henry once again takes up arms against the physically much superior Lys – only to be fatally wounded. But as he dies, Green Henry's face wears an expression of happiness and immeasurable satisfaction, for he knows that, in death, he is to be reunited with his beloved Anna.

Voices from the press 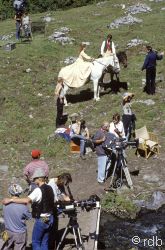 «Thomas Koerfer's artistic commandment seems to have been: Thou shalt make a film that anyone can understand, without having to be familiar with Gottfried Keller novel and its period.

He has remade the novel's epic structure into material of the most dramatic intensity.

...it is his montage, carried on the wings of his soundtrack, which transforms the drama of Green Henry into an opera of overflowing visual force. It is a delight.»

Together with his screenwriter, the Hungarian author Peter Müller, Thomas Koerfer has combined the characters of Judith and the actress into one single figure. Such a decision may appear arbitrary to those who demand a faithful adaptation of Gottfried Keller's Green Henry, but it is Koerfer's view that a work of such stature and complication, as delightful as it is on occasion wordy, cannot possibly be filmed "faithfully". The question is, should one attempt to film it at all? Is Thomas Koerfer to be censured for his lack of respect for the classics, a radical break with his more reverent predecessors?

The reproach would be ill deserved, not only on account of Koerfer's many years of experience with Keller's material, in addition to his proven ability to adapt a literary text with a mixture of delicacy and invention, as witness his treatment of Robert Walser's The Assistant.

The project is more than five years old, dating from Koerfer's first attempt with Dieter Feldhausen, a co-author of the script for The Assistant. At the time Koerfer was convinced that Keller's novel required a solid foundation in "Alemannic" culture, and even considered filming it in Swiss-German dialect.

Koerfer approached the material a second time with the help of Thomas Hürlimann. The script began to develop in kaleidoscope-fashion, revolving around Gottfried Keller, Green Henry and their epoch; and as a visual vocabulary evolved with which to express the nineteenth century as precisely and meaningfully as possible, yet the novel's main character was left seeming oddly detached.

Koerfer was at a loss to continue, and let the material rest, until he found in Peter Müller a collaborator whose uncomplicated relationship with Keller allowed him to help Koerfer prepare a viable screenplay. Müller, who had written "Cable railway", a story about the death of an elderly man in a mountain sanatorium, was already deeply immersed in the interaction of Eros and Thanatos; indeed, Luchino Visconti had taken him on as a member of the team working on the screenplay for his adaptation of Marcel Proust's A la recherche du temps perdu (which was, however, never filmed).

The solution for Green Henry was to avoid saturating the film with high culture and thus limiting its accessibility by requiring of its viewers an intimacy with the novel and its period. The story's centre of gravity was now relocated in the love affair between Henry and Anna, with multiple, concentrated references to the expansive section "A Tale of Youth" from the first version of Green Henry. In Koerfer's film, the "tale of youth" develops as a sequence of flashbacks, framed by the carnival in Munich, the "city of art", and closing with Henry's death.

This death, however, is not that of the failed, impoverished artist, returning home to dissolve in shame at his mother's grave, laid low by the unpaid debt he owes as her son. The film has Henry dying - or rather, invoking death - in a scene that Keller did indeed include in his novel, but which has nothing to do with his protagonist's death. What had been an episode featuring a duel between Henry and Ferdinand Lys, his artist friend, now becomes a very fight to the death. For this is a Henry who challenges death, fully conscious of his guilt towards Anna, whom he has betrayed, and still unable even after her death to devote himself wholly to one love.

This is a different young man from the one we know in Keller's novel, with his incapacity for emotional commitment. Koerfer and Müller find for love, a decision the Henry of the novel lacks the courage to make. The two female figures are introduced as a child and, as noted above, as a young woman, so as to further concentrate Henry's love story with Anna and Judith.

This is a Henry who is united with Anna in death, this time for good. Koerfer is well aware of the difficulties posed by his attempt to convey such a vision, and yet he is led in his work by a motif of union that he identifies as central to Keller's oeuvre in general, particularly as embodied in his novella "A Village Romeo and Juliet".

The profusion of locales, and especially interiors, required for the production made the use of a studio a prerequisite. With the considerable support of the film sponsorship programme of the German state of North Rhine-Westphalia, such a studio was found in Bochum. Green Henry is in fact a Swiss, German and French co-production, under the aegis of Condor Productions in Zurich. Production costs are approximately one million Swiss francs.

The locations needed to establish the film in both its rural and urban scenery are all stand-ins, the authentic places having too radically changed character since the novel's era. "Munich" is represented by Potsdam - and not only on account of the German state of Brandenburg's contribution to the project. Nor is it because both the city and the canton of Zurich inexplicably refused to co-finance the film that Zurich's old town is represented by the "Quartier bas" in Freiburg im Üchtland: in fact, Zurich's renovated façades would have come across looking far too kitschy in the film. Judith's house, meanwhile, actually stands on the Ballenberg, in Switzerland's open-air historical museum. The construction chosen is the "Adelbodenerhaus", which, although completely different from the dwellings typical of Zurich's lowlands, still breathes a certain charm, with its veranda and its stoop, set in a landscape of steep ascent and dusky woodland walk, and projecting just the right mood for Henry's encounter with Judith.

Assumpta Serna, crowned Spain's favourite actress, may not be the Judith Keller imagined, a creature with large brown eyes, a mouth set above a full chin, and heavy dark hair; and yet with her reddish locks she is every bit as lovely a woman as her creator could have wished for. Mathias Gnädinger is the corpulent uncle, and Thibault de Montalembert's Henry is a mixture of youthful elegance and romantic sensibility.

As a filmmaker Thomas Koerfer radiates a quiet authority. He commands his technical crew with the same steady hand he uses to elicit candour from his actors; as they shoot a scene on the Ballenberg, for instance, they listen intently to his instructions, following his subtlest nuance with patience, bearing with him as he repeats the various takes, from total to medium shot to close-up all the way to the most extreme detail. Koerfer is storing up visual material for the cutting room, drawing out the most exquisite suggestiveness from his subjects. The process requires patience and endurance, and the members of cast and crew all do their part, taking their lead from cameraman Gerard Vandenberg. Vandenberg most recently worked with Edgar Reitz, creating the images for the second run of his "Heimat" series, and he is a master of intensely precise, atmospherically perfect scenes. 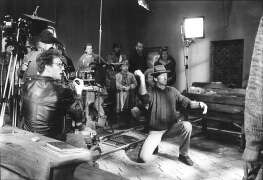